At this point in time, I just have to blog about something major. I may not be exactly where I want to be weight-wise, but I'm proud of my 91 pound weight loss!!! Here's some before and after pictures... 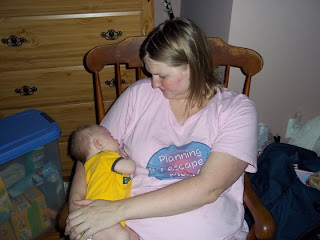 This was me in the summer of 2011, only months after J was born. 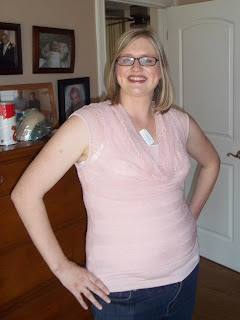 Over this journey, I have learned so much more about myself. In the past, I was an all-or-nothing person when it came to food. I only ate "good" or "bad" and there was no in-between. Either I was "on track" and wanted to eat and exercise perfectly or I was "off track" and ate pretty much anything I saw (of course mostly fatty, greasy foods). Now that I'm 30 years old, I realize that I don't need to be perfect and as a mom of a tot, I don't have time for that. Do I aim to eat as well as I can? Of course I do. I aim for 5 servings of fruits and veggies per day, lots of water, and whole grains over unrefined grains; but I have my moments where I splurge on the less than favorable foods. I still eat Hamburger Helper or processed foods in the occasion that my father-in-law makes that and I don't feel like cooking a separate meal, then I just add in a serving or two of vegetables with it to fill myself up. I have some weeks when I walk all over the place and also work out 5 days at the local Y, but there are other ones when I am not as active. AND I'm okay with this. I've learned that if I am going to be a healthier person, I have to let this fit into my lifestyle and accept that I'm human; I'm going to crave "bad food" and as long as I eat what I want in moderation and track it, and am active when I can be, I'll be moving toward a healthier weight. In the meantime, I feel happy and confident, and I know that I'm doing the best that I can for myself.
Posted by Unknown at 11:38 AM No comments:

"Cow's Milk is for Baby Cows"

Lately, there is a battle between those who are anti-cowmilk and those who are pro-cowmilk. From what I've seen, people seem to see things in black and white as they do most things. The anti-milk group is known for saying, "Cow's milk is for baby cows" and points out the fact that our species is the only one that drinks milk from another species. In nature, animals nurse their young then when weaned those animals drink water and eat whatever it is that their species eat. Even baby cows can only drink straight from the tap and if they drink homogenized milk, they would die (this fact came from a farmer whom I spoke to). From research, I've read on a few websites that most humans can only digest lactose for the first few years of life in order to digest their mother's milk then gradually develop lactose intolerance. That fact is something that I can relate to as both my husband and I have problems digesting dairy, and in my case it is a recent issue. Many people who are against cow's milk also say that milk is not even a necessary beverage as the nutrients found in milk can be digested via a healthy, varied diet.

On the other fence, a lot of people grew up drinking cow's milk and see it as something worth continuing to drink and to give their children. Heck, cow's milk is creamy and tasty and we all know it is chock full of calcium and vitamin D. Basic argument is that a doctor or pediatrician wouldn't recommend dairy milk if it weren't good. More commonly, people who drink cow's milk purchase homogenized milk in the store, but there are more "natural" individuals who prefer raw milk (unpasteurized) milk, saying that it is easier to digest and more healthy.

When it comes to the two sides of things, I go both ways. Considering the fact that there are so many milks on the market (almond milk, coconut milk, rice milk, soy milk, etc) and the digestive issues that hubby and I have with milk, the two of us drink vanilla almond milk. It can be pricey, however, I'm a serious couponer, so I have yet to pay full price for almond milk. Our son J does get whole milk but he gets lactose free because he's always had dairy issues and lactose free doesn't present a problem for him. I will say that I prefer organic milk over non-organic because of rBGH as well as hormones found in non-organic; I also found that organic milk just tastes better. Further, my personal belief is that kids are developing earlier and there are more health problems due to hormones and chemicals in foods we buy in the supermarket nowadays. Others have tried telling me that children don't need cow's milk but I feel that the fat in whole milk is better for my tot who sometimes goes days barely eating anything; it is the days when J eats next to nothing that I am comforted knowing he's getting protein, fat, and other vitamins and minerals from his milk. Someday, J probably will be drinking almond milk along with his mama and daddy but in the meantime I'm happier giving him organic lactose free milk that meets his nutritional requirements.

What are your thoughts on dairy milk vs non-dairy diets?
Posted by Unknown at 8:30 PM No comments: